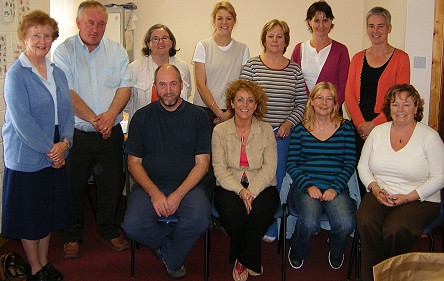 Ennis has a very strong Active Citizenship Network and great many members attended. The meeting was very focussed and already there have been many worthwhile initiatives resulting from the meeting.

Aobhan Haverty, Clare’s VEC Community Education Facilitator attended. Aobhan had not previously attended a training trainers workshop and subsequently a trainers workshop took place in Ennis in September. Clare network members organised themselves to focus on a Voter registration week in October. They identified 40 venues in Clare where they had a display, brochures and registration forms available. Alongside this they promoted this registration drive and ran a competition on Clare FM. The competition involved people composing catchy slogans to encourage Voter Registration and Voting.

Members from Limerick city also attended the Ennis meeting and realised they needed more members before they could organise a registration drive or similar events in Limerick city. Mary Flannery, Community Education Facilitator from Limerick VEC subsequently organised a training trainers workshop in Limerick in early September. The workshop was a great success with community workers/adult educators from CDPs, Resource centres, the VEC and Paul Partnership attending. We now look forward to expanding our Limerick network and it is hoped the Active Citizenship/Voter Education workshop will become better known in Limerick city and environs.