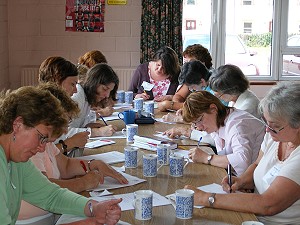 The Mallow meeting was attended by network members from Cork city, Fermoy and Mallow representing many different organisations. The members appreciated meeting people from others areas and organisations.

Wonderful brainstorming and discussions took place in Mallow on a Monday morning and the group gave wonderful feedback on how useful, energising and inspiring they found the meeting. It also focussed them on Election 2007 and different initiatives that can be taken in Cork city and county to encourage registration voting and political participation.

Towards the end of the meeting the large group formed themselves into three smaller ones, with one group coming together to organise Voter registration in the Mahon, Togher and Ballyphehane areas of Cork City, another group focussing on Mallow and a third on Fermoy. All three areas will hold Voter Registration drives in the autumn.