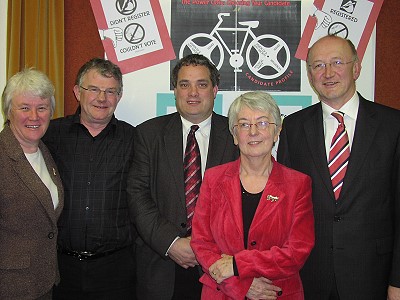 ‘I’m a Politician. Get me Outta Here’

Outline:
As part of the Voter Education/Development Education Programme at Warrenmount, and with a General Election in the near future, the decision was taken to run a Questions & Answers event with the local candidates in The Dublin South Central Constituency.

This was not the first Questions & Answers event run at Warrenmount, so we were familiar with the process. A number of years ago our Men’s Group ran a similar event that was highly successful. The format would copy that of the RTE programme as far as possible with questions being screened beforehand. The focus was to be on the benefits to the learners of asking the question and not on the particular answer that would be given.

During the Voter Education programme, a number of issues were highlighted that formed the basis for the questions that would be asked. Issues such as Housing Developments taking place in the area, the effects of immigration, transport, etc. Also during the Voter Education programme, it became obvious that (in general) the local residents did not hold their public representatives in high esteem. There was concern around controlling who asked what questions and making sure it did not turn into a shouting match. What we wanted was an orderly, civilised event where there would be discussion and debate rather than insults and shouting.

The title ‘I’m a Politician Get me Outta Here’ was decided upon after consultation with some of the politicians. It was thought that it might be too trivial for what was intended to be serious discussion. But people thought it was good and caught the eyes and imaginations of the public. Posters were drawn up and once we had finalised the list of politicians the publicity started.

The Participants
We began by contacting all the local representatives and trying to set a date and time that would be suitable for all. Initially we were looking at a 6pm starting time on Wednesday 29th November. The reason this seemed suitable was that there is always a Dáil Vote on Wednesdays at 8pm, so the TDs do not take on commitments at that time. This did not work because of lack of availability of the chosen Chairperson (Bryan Dobson) and the date and time were changed to Thursday 30th at 8pm. This seemed to suit all the politicians with the exception of Gay Mitchell of Fine Gael who had commitments in Europe that day.
After a fair amount of time on the telephone and emails shooting back and forward the date and time was settled, and the politicians were all onboard (with the exception of the Fine Gael TD). Cllr. Catherine Byrne deputised for Gay Mitchell and a candidate for the Green Party was also included. This would be the first Green candidate to run in the district.

The final list of politicians was set as follows:

The Chairperson was Bryan Dobson (RTE Newsreader) who proved to be an excellent choice. Bryan comes from a journalistic background and was able to manage the night with charm and efficiency (a rare combination of skills). Bryan was well able to judge when to allow discussion to continue and when to move on to the next issue.

The Night
Confirmation was sent to those taking part and the call was put out to the locals for questions and volunteers to ask the questions. Some of the questions needed to be worded slightly differently in order to elicit discussion. There were instances of questions and no-one to ask the question and it was decided to nominate people on the night. This was not ideal but worked pretty well. Often people do have issues they want to raise and discuss but do not have the confidence to do it themselves.

To avoid the night turning into a free-for-all, we decided to hire a P.A. for the night. The hall that the event was taking place in does not really need one, but it meant that if things got out of hand we could turn off microphones and use the P.A. as a control device. This worked and also had the added benefit of giving the night that authentic look of a proper TV show. Initial quotes for a suitable PA were very high with one company quoting €324. This was well outside of our budget. Luckily we found a PA company that would provide all we needed, deliver, install and pick up the next day for €190. This was ideal and we would recommend this company to anyone in need of PA equipment.

Everything was set up. Press releases had been sent out to media and with an interview on Anna Livia publicising the event we were all set to go. Unfortunately the weather on the night in question was appalling and many people decided to stay at home rather than go out in the wind and rain. This was impossible to foresee and unavoidable but all the invited guests arrived and the event began in good time.

The audience heard a short introductory speech from The Centre Outreach Worker outlining the event and thanking everyone for coming. It was then passed over to Bryan and the questions began. The first was from a member of the Polish community and concerned the immigrant population. There was plenty of opinions and debate and the night really began to take on a life of its own. The discussion was thorough, informative and sometimes humorous with plenty of friendly banter between the politicians.

The one thing that did become obvious was that there were many issues that were interconnected and while the discussion might be on housing, related issues of transport, environment, etc came up. Perhaps in the future it would be good to try and foresee where these crossovers would take place and arrange the questions accordingly.

Once the questions were finished, the Deputy Director of the Centre gave another short speech outlining the next stage of the Programme – Development Education, and Bryan was presented with a basket of organic food. A photograph of the politicians was taken and everyone settled down to Tea and Biscuits as the discussion became more informal in groups of 2 or 3.

All in all this was a very successful night and many commented on how well it had been run and how enjoyable it was for all concerned. We are now in the aftermath and as with all other events, loose ends are being tidied up, thank you notes sent to all and press releases sent out to media with photographs.

We recorded the event on audio and no doubt there will be some material there that will be useful in terms of the election and the report to be sent to Irish Aid who funded the programme.