Who Will I Vote For?

Gilbert Keith Chesterton had a point about voting – a man or woman should vote with passion because how you vote does make a difference. There are many ways in which voters select their candidates. Some people go to the polling booth and make their selection based on where the candidates name is on the ballot paper, or how they look or how their name sounds. Others ask family or friends for advice or some rely on the politicians. Others take the recommendation of co-workers or a person in the media or some other prominent person.

We suggest a simple two part process called The Power Cycle. This requires us to clarify features of ourselves as voters and features of the candidates so we are clearer and have greater assurance in selecting a politician to represent us and our issues. 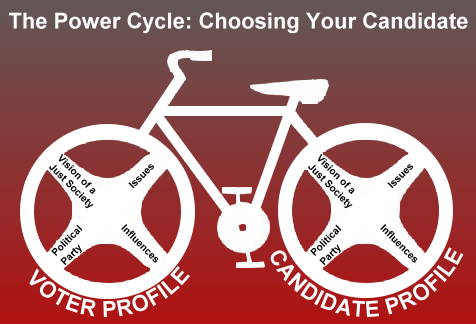 On our bicycle the voter occupies the position of the front wheel. The candidate is in the back wheel position. The spokes of each wheel have reference to features of both voters and candidates. Each has:

We need to look at ourselves as Voters and at the candidates as we pursue the choice of candidates that best match our interests as voters. We can find out about the candidates from their manifestos, websites, and brochures and by asking them questions!

On our bicycle the voter sets the direction and steers the course. The elected candidate does the work in the direction set by the voter. A bicycle requires two matching wheels to function effectively, in the power cycle we aim for a match between the front wheel and the back one so the chosen candidate will advance the agenda or issues of the voter. WE need to vote for a candidate who will have a similar vision of a just society as ourselves and who will work on our issues moving them in the direction we would like.